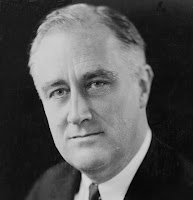 On this day in 1942 President Franklin D. Roosevelt visited the Mare Island Navy Yard. Less than a year after the attack on Pearl Harbor, Mare Island was then at the peak of its wartime production. Thousands of defense workers toiled round-the-clock to build and repair ships for the U.S. Pacific Fleet. Although Roosevelt’s visit was the talk of Vallejo, wartime news blackouts kept official word of the visit out of the local newspapers for a week. Finally, on October 1st, the Vallejo Evening Chronicle told the story:

“One of the biggest stories in the town’s history became public property today,” Will Stevens wrote. “What every Vallejoan and his brother has known since Thursday, September 24, the White House officially revealed this morning. The President of the United States was here on that day, toured Mare Island Navy Yard for more than an hour, and was ‘astonished!’ at the growth of America’s No. 1 Navy Yard.”

“Newspapermen across the country – including, of course, Vallejo newspapermen – two weeks previous to the visit had been told by the Office of Censorship that the President planned to inspect various war camps and navy yards, that nothing was to be said about it until the tour was over.”

“As early as Thursday morning, when the President arrived in this area, not even a whisper had preceded his visit – except in those official Army and Navy circles in this area whose job it was to guard the safety of the chief executive.”

“At 11 a.m., preceded by a flock of Army chiefs and command cars, loaded to the hilt with guns and live ammunition, the Presidential automobile – fidgety secret service men hanging onto the side – sped down Tennessee Street headed for Mare Island. At the Causeway gate, Rear Admiral W.L. Friedell, commandant of the Navy Yard, greeted President Roosevelt, welcomed him to the Yard, climbed in the front seat of the Presidential automobile. For an hour – or more – the Navy had “taken over” from the Army.”

“It can now be revealed that the most extreme precautions were taken prior to the inspection trip of the President – and in direct contrast to his visit here several years ago it was really a secret until authorities were ready to let out as much as they wished the public to know.”

“Even now, the precise line Mr. Roosevelt toured through Mare Island cannot be revealed, but it can be reported that he stopped briefly in front of Shop 31, and again at the Mare Island Naval Hospital.”

“The scene at the Hospital was particularly dramatic.”

“Long before the Presidential car, still flanked by its vigilant secret servicemen, arrived on the Hospital reservation, American lads, wounded on this nation’s far-flung battlefronts, had been wheeled out by smartly clad nurses, brightly colored blankets thrown over the knees of the boys. Directly behind them stood the sailors in their whites. And directly facing this group was a trim line of medical officers, all attached to the hospital. Then came the hospital nurses, flanking the officers and the young, wounded heroes in their wheelchairs.”

“Next, a company of U.S. Marines marched up to the scene to form an Honor Guard for the President when he arrived.”

“And at last, he arrived, grinning and apparently very happy. The Marines presented arms, the officers saluted, even the wounded boys in their wheelchairs straightened their shoulders – and returned the confident grin of their Commander-in-Chief.”

“One of the wounded lads – his buddies chided him afterward for shaking hands ‘with the boss’ – was wheeled up to the Presidential car and greeted by the President.

“From hundreds of rooms in the hospital buildings, other lads – unable to be on the scene, looked down from windows, getting a thrill matching even those they had found ‘somewhere in the Pacific.’”

“And then, seemingly in three seconds, the Presidential car had been turned around, the nervous secret servicemen still 100 percent on the job, and the President and his car had disappeared, a dutiful Army jeep full of cameramen and Washington correspondents following.”

“At one point during the tour the President declared: ‘I thought we had seen all the workmen there are – but here are thousands more!’”

“At another point on the tour the President said: ‘I am astonished at the expansion of Mare Island Navy Yard since my last visit here.’”

“The chief executive, it was learned, left no doubt of his complete realization of the great job being accomplished at Mare Island Navy Yard, one of the nation’s biggest and most important defense plants.”

“Indeed the general - and unofficial – impression was that the President was very pleased with what he saw in this area, only one of the many points visited on his nationwide trip.”

“Meanwhile, even before the President came along Highway 40 from Carquinez Bridge and then rode down Tennessee Street toward the Causeway, word had spread around town that ‘something big is doing’ – but what no one knew.”

"They knew only that Tennessee Street was being cleared by soldiers and Army jeeps – being cleared in a hurry for dome mysterious reason. Traffic along the thoroughfare halted right now, cars were shunted over to the side of the street, and the drivers told to stay where they were. They did.”

“The extremely effective veil of secrecy which characterized the early phases of the President’s visit to Mare Island was purposely dropped shortly before his arrival at 11 a.m., and office personnel at the yard were told of his visit, given permission to stand in one spot – and look when the chief executive passed by. Hundreds did look – and got a thrill they’ll never forget.”

“It was the general impression of onlookers that the President was in excellent health, a judgment confirmed by those who met him personally.”

“The tour of the yard completed, the Presidential car started toward Vallejo again. At the Causeway gate, Admiral Friedell left the car, and bade the President farewell, and the Army again took over.”

Posted by Vallejo Naval and Historical Museum at 10:53 PM