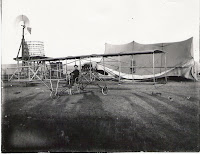 Pilot and airplane builder Rueben Coombs built Vallejo’s first airplane with his partner Paul Butler around 1910. The plane was made of bicycle parts and the enterprising builders had a Grey Eagle engine shipped out from Kentucky to power the machine. Their early “airfield” was located on the Hann’s Ranch, which today is the area at the end of Nebraska and Illinois Streets, near Interstate 80. Pilot Coombs is shown here with the plane.

Vallejo has also had several small airports over the years, including Sky Harbor, established just after WWII about two miles north of the city. Another of Vallejo’s early landing fields was Knight’s Airport, located near the present day intersection of Sacramento Street and Highway 37, where early day pilots often had to dodge jackrabbits scurrying across the landing strip. A further drawback was the fact that the field was frequently submerged under two to three feet of water after heavy winter rains. The Mini Airport was located near the intersection of Highway 37 and Broadway. Tall eucalyptus trees (a few still there) presented an interesting challenge for incoming pilots.

Posted by Vallejo Naval and Historical Museum at 10:01 PM