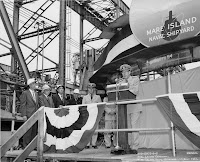 Mare Island celebrates its birthday on September 16th. It was on that day in 1854 that Captain David G. Farragut arrived at the then- remote outpost to establish the first U.S. Navy Yard on the Pacific Coast. But in 1961 Mare Island celebrated its birthday three days early. It was on this day, 47 years ago, (September 13, 1961) that a keel laying ceremony was held for Mare Island’s 8th nuclear submarine, the USS Woodrow Wilson (SSBN 624).

After 17 months of construction, USS Woodrow Wilson was launched on February 22, 1963 and commissioned in December of that year. The Lafayette-class ballistic missile submarine departed Mare Island in January 1964, transited the Panama Canal, and eventually was homeported in Charleston, South Carolina. During her long career the “Woody Woo” made 71 deterrent patrols, in both the Atlantic and the Pacific. In 1990 she was converted from a ballistic missile sub to an attack sub and re-designated SSN 624. USS Woodrow Wilson served the Navy for 30 years, until her deactivation in 1993. The sub was decommissioned in 1994 and later scrapped. Former crew members still uphold the proud traditions of the Silent Service.

Posted by Vallejo Naval and Historical Museum at 4:11 PM