Scottish-born author Robert Louis Stevenson (1850-1894) was one of the greatest story-tellers of the English language. Stevenson is known for such classic tales as “Treasure Island,” “Kidnapped” and “The Strange Case of Dr. Jekyll and Mr. Hyde.” In 1879 Stevenson traveled from Europe to the west coast of the United States, hoping that California’s moderate climate would improve his fragile health. More importantly, Stevenson was pursuing the great love of his life, Fanny Vandegrift Osbourne, whom he had met in France in 1876. Finally reunited in California, Fanny and Robert married in May of 1880 and embarked from San Francisco on a honeymoon adventure to the rugged slopes of Mount St. Helena near Calistoga. The trip was later immortalized in Stevenson’s book “Silverado Squatters.”

After departing from San Francisco the newlyweds traveled by ferry boat and train, eventually reaching South Vallejo, where they spent their first night. In “Silverado Squatters” Stevenson later described their uncomfortable stay in Vallejo:

“South Vallejo is typical of many Californian towns,” Stevenson wrote, “It was a blunder. The site has proved untenable; and, although it is still such a young place by the scale of Europe, it has already begun to be deserted for its neighbour and namesake, North Vallejo. A long pier, a number of drinking saloons, a hotel of a great size, marshy pools where the frogs keep up their croaking, and even at high noon the entire absence of any human face or voice — these are the marks of South Vallejo. Yet there was a tall building beside the pier, labeled the STAR FLOUR MILLS; and sea–going, full–rigged ships lay close along shore, waiting for their cargo. Soon these would be plunging round the Horn, soon the flour from the STAR FLOUR MILLS would be landed on the wharves of Liverpool. For that, too, is one of England’s outposts; thither, to this gaunt mill, across the Atlantic and Pacific deeps and round about the icy Horn, this crowd of great, three–masted, deep–sea ships come, bringing nothing, and return with bread.

The Frisby House, for that was the name of the hotel, was a place of fallen fortunes, like the town. It was now given up to labourers, and partly ruinous. At dinner there was the ordinary display of what is called in the west a TWO–BIT HOUSE: the tablecloth checked red and white, the plague of flies, the wire hencoops over the dishes, the great variety and invariable vileness of the food and the rough coatless men devoting it in silence. In our bedroom, the stove would not burn, though it would smoke; and while one window would not open, the other would not shut. There was a view on a bit of empty road, a few dark houses, a donkey wandering with its shadow on a slope, and a blink of sea, with a tall ship lying anchored in the moonlight. All about that dreary inn frogs sang their ungainly chorus.

Early the next morning we mounted the hill along a wooden footway, bridging one marish spot after another. Here and there, as we ascended, we passed a house embowered in white roses. More of the bay became apparent, and soon the blue peak of Tamalpais rose above the green level of the island opposite. It told us we were still but a little way from the city of the Golden Gates, already, at that hour, beginning to awake among the sand–hills. It called to us over the waters as with the voice of a bird. Its stately head, blue as a sapphire on the paler azure of the sky, spoke to us of wider outlooks and the bright Pacific. For Tamalpais stands sentry, like a lighthouse, over the Golden Gates, between the bay and the open ocean, and looks down indifferently on both. Even as we saw and hailed it from Vallejo, seamen, far out at sea, were scanning it with shaded eyes; and, as if to answer to the thought, one of the great ships below began silently to clothe herself with white sails, homeward bound for England.

For some way beyond Vallejo the railway led us through bald green pastures. On the west the rough highlands of Marin shut off the ocean; in the midst, in long, straggling, gleaming arms, the bay died out among the grass; there were few trees and few enclosures; the sun shone wide over open uplands, the displumed hills stood clear against the sky. But by–and–by these hills began to draw nearer on either hand, and first thicket and then wood began to clothe their sides; and soon we were away from all signs of the sea’s neighbourhood, mounting an inland, irrigated valley.”

Despite the fact that Stevenson described South Vallejo as “a blunder,” his brief visit here is nonetheless a reminder that Vallejo once hosted one of the great wordsmiths of the 19th century.
Posted by Vallejo Naval and Historical Museum at 4:24 PM No comments: 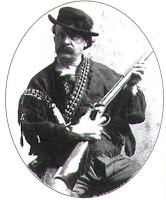 On this day, 140 years ago, the well known dime-novelist and Western raconteur Ned Buntline gave one of his famous Temperance 'lectures' in Vallejo.

Following his lackluster reception on this 1869 California tour, Buntline would meet up with Buffalo Bill Cody and begin to publish the popular stories that made Cody famous and Buntline rich. The Vallejo Daily Chronicle advertised Buntline's performance as follows:

TIME MUST BE KILLED

How to do it most genteelly is the question

Associated with the greatest violinist of the age

Will give a chaste popular entertainment at Vallejo on Saturday evening Jan. 16th. The performance will consist of an address entitled “California 25 years ago – Now – 25 years hence” by Col. Judson, followed by violin solos by Geo. Edmonds, “stories in character” French, Dutch, Irish, Yankee and Quaker, also

A wild story of wrong, given in full Indian costume and paint by Ned Buntline.

A few days later, the paper had a more critical appraisal of Buntline's show:

“Ned Buntline, the notorious, was here last Saturday night. To style his blathering a “lecture” would be burlesquing the English language. Buntline may be a hero and a man respected in his own land, if so, we advise him to travel home instanter. The Order of I.O.G.T. made a bad hand of it when they started that polluted and nonsensical piece of humanity around the State to preach temperance and morality to Californians. A man must practice what he preaches, and the people saw in his countenance that his sermons and his actions were not alike. His modesty was like the points in his ‘lecture’ – had none. His Indian costume consists of a pair of dirty drawers and undershirt, a meager head-dress, something thrown over one shoulder, and in this rig he calls a ‘Comanche costume’ he appears before the people and makes a speech. Ned Buntline you won’t do!”
Posted by Vallejo Naval and Historical Museum at 5:47 PM No comments: