The years 2012 through 2014 mark the 200th anniversary of the War of 1812, a war      that tested America’s resolve against Great Britain and guaranteed our young nation’s independence. The War of 1812 was also primarily a naval war, with battles in the      Atlantic, the Great Lakes and, most significantly, in Baltimore Harbor, where Francis     Scott Key was inspired to write “The Star Spangled Banner.” 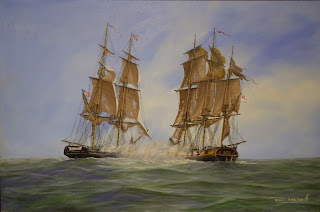 The Vallejo Naval and Historical     Museum’s newest exhibit features        18 paintings of warships and naval engagements from the War of 1812.      The paintings are the work of artist     Hans Skalagard, whose paintings depicting ships of World War Two’s      North Atlantic convoys were exhibited      at the Museum several years ago.

Hans Skalagard is a world renowned marine painter, who has been described as a “living legend” by art critics. A descendant of Vikings, Skalagard was born in the Faeroe Islands of Denmark in 1924. He began painting at the age of 8, and by the age      of 14 began to carry on the family’s seafaring tradition, becoming an apprentice seaman      on a square rigged ship. Thus, he began the experiences that allowed him to create accurate paintings of such ships.

Hans grew in experience and served on merchant ships during World War II convoys. He survived the sinking of four ships in six years during the War, enabling him to draw on
these experiences and paint the series of ten “North Atlantic Convoy Scenes” which were previously exhibited at the Museum.

Hans initially moved to the United States in 1943 but returned to Denmark after the war   to study at the Royal Academy in Copenhagen.  In New York, he had a one man show        in 1954, where he had studied with the marine painter, Anton Otto Fisher. In 1955, Skalagard became an American citizen and soon after married his wife Mignon, who    became his business manager.

In 1961, his works were exhibited at the Legion of Honor in San Francisco.  He remained    in California, becoming a fixture in his Carmel gallery, “Skalagard’s Square-Rigger”.

Skalagard has had numerous one man shows both in the United States and in Europe and his paintings hang in many public buildings. Examples of such locations include the Naval Post Graduate School in Monterey, the Los Angeles County Maritime Museum, the Allen Knight Maritime Museum in Monterey, and galleries in Norway, Denmark and his    native Faeroe Islands.  His paintings are owned by collectors world over and he is the       holder of six gold medals for his work.

Hans spent over thirty years at sea and his paintings accurately reflect this knowledge     of sailing ships and the weather at sea. At age 89, Mr. Skalagard is still actively painting    at this date and currently, with his wife Mignon, resides in Petaluma. “The War of 1812: Ships from the Age of Sail” continues through June 29 in the Museum’s Hall of History.

Posted by Vallejo Naval and Historical Museum at 5:30 PM No comments: