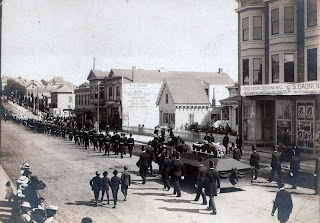 On this day      in 1901, Vallejoans gathered in mourning after the assassin- ation of President William McKinley. McKinley had been shot by anarchist Leon Czolgosz after delivering a speech at the Pan-American Exposition in Buffalo, New York on September 5th. He died nine days later.  Following the announcement of McKinley’s death, hundreds of Vallejoans formed a public procession that wound through the streets of downtown. The procession was led by members of the Vallejo Police Department, and also included a cavalry detail from the Benicia Barracks, a U. S. Marine Corps unit from Mare Island, a group of Vallejo Civil War veterans and representatives from various local fraternal organizations.
Posted by Vallejo Naval and Historical Museum at 7:47 PM No comments: 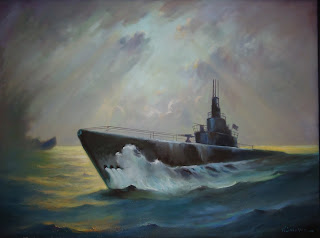 In 1975 the Vallejo Naval and Historical Museum accepted its first official donation: a painting of the original 1927 Carquinez Bridge by artist Julie Polousky. In the succeeding 35 years, our fine art collection has expanded to include paintings, prints, drawings, sculpture and textiles reflecting a broad cross section of works by both local artists and well known regional and national artists. More than 30 of those works are featured in a new exhibit in the Hall of History that continues through October 16th. Most of the works were chosen for their historic themes ranging from submarines to historic architecture to commemorative prints and posters.

Among the works featured in the exhibit are Chinese-American, a bronze sculpture by Beryl McCarthy Wynnyck, created in 1937 as part of the WPA’s Federal Artists’ project; Pipeline Welder, 1928 by Maynard Dixon; Cliff Shadow, Sierra Buttes by Douglass Fraser; USS Wahoo (above), an oil painting of one of Mare Island’s legendary WWII submarines, by Vladimir Shkurkin; Sketch of Mare Island on Aug. 11, ’42 by noted Bay Area watercolorist Dong Kingman; Vallejo-Mare Island Map Series by Roberto Rovira; Carqunez Bridge 50th Anniversary, a limited edition print by Roy DeForest, and many more.
Posted by Vallejo Naval and Historical Museum at 9:41 PM No comments: