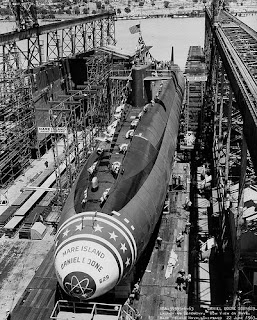 USS Daniel Boone was named after the legendary American frontier pioneer and backwoodsman (1734-1820). The sub was one of the Navy's “41 for Freedom,” - Polaris missile-equipped submarines all named after significant figures in U.S. History. Daniel Boone was sponsored by Mrs. Margaret Wakelin, wife of Assistant Secretary of the Navy James H. Wakelin, who delivered the keynote address at the launching. USS Daniel Boone served the U.S. Navy until she was decommissioned in 1994.
Posted by Vallejo Naval and Historical Museum at 3:55 PM No comments:

Seventy years ago this week, on June 14, 1940, famed jazz pianist Fats Waller played at the Veteran’s Memorial Hall in . “Local dance and music fans,” announced the Vallejo Times-Herald, “will have an opportunity this evening to see and hear one of the country’s out- standing entertaining stars when “Fats” Waller brings his famous orchestra to the Memorial Hall under the auspices of Samoset Tribe of Red Men. The essence of spontaneity in humor, he has an individual style not heard from any other entertainer as he leads his popular dance band.... Dancing will start at 9 o’clock and continues until 1 a.m.” 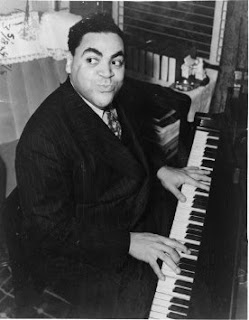 The newspaper promoted the show in almost every edition during the week preceding the dance: “A songwriter of no mean ability, “Fats” is a virtuoso of the piano, organ, violin and a master of ceremonies extra- ordinary. He began his musical career in the choir of the in , where he also played the organ and his father preached. Over parental objection he accepted an offer to sing and play at Leroy Wilkins’ cabaret where he remained until 1924, doubling occasionally as a theatre organist and making piano rolls for the Q-R-S Company. He next took to the vaudeville stage and started writing music for the show “Keep Shufflin’.” Since then his climb to stardom has been unhalted and today he ranks with Benny Goodman, Artie Shaw and other swing masters. His appearance here will be a rare treat for dancers and spectators alike.”
Another article described Waller and listed a few of his many well-known compositions: “Just a big, good-natured boy making a living out of fun, with a smile that won’t come off, is “Fats” Waller, the composer, pianist and vocal entertainer who brings his famous orchestra to Memorial Hall next Friday evening…. As a composer he is known for “Ain’t Misbehavin’,” “My Fate Is In Your Hands,” “I’ve Got A Feelin’ I’m Fallin’,” “If It Ain’t Love,” “Keepin’ Out Of Mischief Now,” and “Crazy ‘Bout My Baby.” He has also written a number of musical reviews, such as “Connie’s Hot Chocolates,” and “Keep Shufflin’.” Waller is recognized as the most outstanding rhythmic pianist in the popular field today.”
Waller, who died in 1943, was just one of the many famous Swing and Big Band era musicians to play in Vallejo during the 1930s and 40s.
Posted by Vallejo Naval and Historical Museum at 9:56 PM No comments: