The decades of the 1920s, 30s, and 40s were the heyday of the Big Bands. Most of the big name national bands played in Vallejo at the Casa de Vallejo, Veterans Memorial Hall, and the Dream Bowl. Vallejo’s own local bands were also popular favorites at dances and concerts. The Ken Harris Orchestra is shown here playing at the Veterans Memorial Hall in 1935. Other popular local bandleaders included Roy Graff, Jimmy Emerson, Hal Hay, Keith Kimball, Gene Gelling and Lou Boss.
Posted by Vallejo Naval and Historical Museum at 7:45 PM 1 comment: 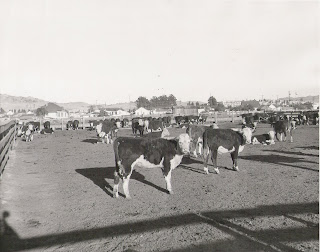 On this day in 1942 the WWII-era Vallejo Defense Council received an odd request: Cowboys.

This is how the Vallejo newspaper reported the story the next day:

“Shades of the Old West were revived last night in a request from Flosden Acres to the Vallejo Defense Council, asking that they help them round up a committee of six cowboys for – of all things – defense work.

Carl B. Lawshe, captain of the Flosden air-raid warden district, and his assistant, A. L. Watson, related their cause to L. E. James, commander of Mare Island Post No. 550, who is chairman of the committee on Civil Liberties.

“Flosden Acres takes in an area on both sides of the tracks, and on the west side of the Solano Meat Company, the wholesalers, who have a number of large corrals and stockyards where beef cattle are quartered before butchering. We figure that in the event of an air raid, these creatures would probably become so frightened from the noise and bombs that they would stampede through their fences like so much matchwood. Suppose at the same time the highways were crowded with vehicles all trying desperately to get safely away. The cattle would naturally dart onto the highways, and where would traffic be?”

“If we had six good cowhands used to managing animals, they could control them and do a valuable thing in keeping cars moving.”

Larry Wise made a note of the request, and will contact nearby ranches from whose cowboys such a group can be named.

Mr. James also gave a short report on the excellent defense preparations being made by Flosden Acres, including an efficient first-aid set-up, a nursing auxiliary of women, and even their own fire siren, furnished by the Hanson Service Station.
Posted by Vallejo Naval and Historical Museum at 5:25 PM No comments: