Thanksgiving in Vallejo During WWII

“Today Vallejo joins with Americans around the world in celebrating their first wartime Thanksgiving in a quarter century, starting the day with prayer service, and climaxing it with the traditional turkey dinner. In many homes, soldiers and sailors have been invited around the family board as guests. 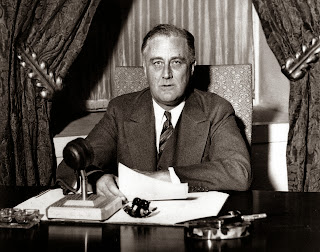 “President Roosevelt will lead the Nation’s prayer services in a White House broadcast carried over the major networks at 8:00 a.m. (PWT). With him will be members of the Cabinet, Justices of the Supreme Court, and heads of the Armed Forces. The President will read his Thanksgiving Day proclamation and songs will follow in the first such Thanksgiving ceremony at the White House.


“While services are held by the Ministerial Union and by other churches, thousands of Mare Island workmen in machine and ordnance shops will be ‘passing the ammunition’ literally, with work as usual. But somewhere during their day, civilians and service men will stop for their roast turkey, and to reflect a moment on the fact that now, both at home and in war news abroad, America really has something to be thankful for.

“American forces on the far flung battle lines may have to take their holiday dinner in emergency rations, but those in the Vallejo and Solano County area will “shoot the works.” Here is an exact U.S. Army menu released yesterday:

“Aboard ships, as far as could be learned, there will also be turkey and trimmings, in a menu much like the Army’s.

“However, in the [Mare Island] Navy Yard’s three large and two small cafeterias, there will be no turkey.

“It would take too long to serve,” was the reason given by F.L. Bonn, general manager of the cafeterias. “We feed more than 23,000 persons, and we could never accommodate this number by our closing hour of 5:15 if we had turkey. However, we’re having the same substantial servings of roast beef, pork and cutlets as they get every day.”

“Ninety inmates of the Solano County hospital at Fairfield will also sit down to a Thanksgiving dinner of turkey, cranberries, mince and pumpkin pie, celery, cauliflower, and other trimmings.

“The “super” dinner and that period of time devoted to church services will be the only evidence of a break in schedule for either the soldiers, sailors or the workers on the American production front.

“Secretaries of the War and Navy Departments have ordered personnel of their departments to observe the day by working as usual. War Production Chief Donald M. nelson called upon those engaged in tasks vital to the victory effort to remain at their jobs.

“The American housewife, who for the first time in three years could invite relatives from a neighboring state without wondering whether or not they had already celebrated the holiday, found that her 1942 dinner was costing her more than at any time since 1919.

“The Office of Price Administration said the average cost was offset by the higher average family earnings.”

Posted by Vallejo Naval and Historical Museum at 9:42 AM No comments: