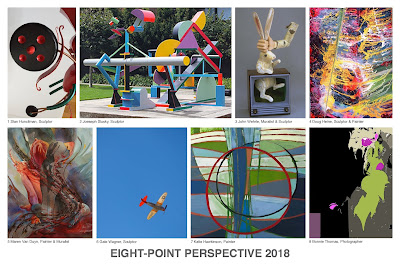 A new exhibit in the Museum’s Hall of History features eight East Bay artists working in a variety of media. “Eight-Point Perspective: Diverse East Bay Artists” was organized by Vallejo native Doug Heine, whose work was featured in a solo show at the Museum last spring. Although planning of the exhibit has been underway for several months, finding a connecting theme or narrative for the show was elusive, according to Heine. “Mainly because of the diversity of media and styles of the eight artists, it soon became apparent that this diversity was the theme,” says Heine. “Diversity is what the East Bay is known for, so I hope everyone will enjoy seeing the art and hearing the artists speak about their creations.” Each artist will speak briefly about his/her work at the opening reception on Saturday, January 20 at 1:00 p.m. Here are the artists featured in the exhibit:
Katie Hawkinson is a Bay Area Abstract Painter with an ongoing interest in color and light, and capturing visually something of what it feels like to be alive. She feels a strong connection to makers and painters from the beginning of time from all over the world.  Katie is inspired by cave paintings, Roman frescoes, Indian miniatures, early American folk art, through twentieth century abstraction and beyond. Katie teaches Painting at Stanford’s Continuing Studies Department and Drawing and Two-dimensional Design at UC Berkeley’s Architecture Department.
Doug Heine is working with industrial as pigment on aluminum, which can feel like reaching into the unknown. Although an abstraction, the work has an elusive, mysterious quality that harkens to the ever-expanding cosmos.
Stan Huncilman was born in Indiana. After graduating from high school he left home with no particular destination in mind. His travels led him to stints as a welder in the shipyards of Louisiana and as a machinist in a Vermont foundry. Not long after leaving Vermont he joined the Peace Corps and went to Ecuador to teach in a trade school for orphans. After the Peace Corps he eventually settled in San Francisco California and began his formal art education. He attended San Francisco State University and the San Francisco Art Institute. He received his MFA in Sculpture from the Art Institute in 1984.
Joseph Slusky is best known for his whimsical painted metal sculptures made from recycled scrap metal. Influences include metal toys, LA car culture, Constructivism and other twentieth century art movements. The sculptures explore realms of the subconscious and are fossilizations of the imagination. Joe taught drawing and three-dimensional design UC Berkeley’s Architecture Department for thirty-two years
Abstract painting called Bonnie Thomas first, only to be taken later with photography's compositions and focus on the small and minute beauty within the every-day experience. She then began to alter the captured image to discover a unique combination of the orthogonal edge, the organic world and her inner self. The explorations prominent in her latest work are the contrast between dark and light, the chasm between the expressed and unexpressed, and the questions that may represent joy, fear or that part of the human experience which eludes us. With this exploration, she believes the work takes her deeper into the unknown parts of herself within the greater context of the natural order.
Maren Van Duyn is a senior designer at Scientific Arts (the people that did the giant Glove at AT&T Park). With them she has done large murals at the California Academy of Sciences in San Francisco and the natural history section of the Oakland Museum. Earlier she did theatrical sets in New York City.
Gale Wagner feels his calling as a maker was a gift at birth, followed by the good fortune of living a life full of passion for creating stuff to be shared with others. His sculptures have been many – large & small, heavy & light, solid & hollow. Pure joy in the creative process, coupled with love and respect for all materials used – steel, paper, glass, stainless, copper, bronze, stone, wood, rubber, air, space – always at play with gravity & balance. The hope is that the viewer will feel something.
John Wehrle has had an extensive career creating site-specific artworks for public spaces. A multi-disciplinary artist, John has fabricated elaborate installation works combining text, painting, photography, ceramic tile or relief sculpture for libraries, banks, buildings, and freeway walls. His critically acclaimed work includes monumental paintings for   the de Young Museum, the Los Angeles Olympics and Berkeley Transit Plaza. “I am an artist who is   most comfortable making large scale narrative paintings in unsuspected places. I put myself in the Western Tradition of Tiepolo, Andrea Pozzo, Breughel, Church, Eakins, the anonymous panoramic painters of the 19thcentury, Hopper and the LA Fine Arts Squad. I like a work that has a sense of mystery, ambiguity. If there is a political message to my work it is probably closest to an anarchist with OCD.  WYSIWYG.
Posted by Vallejo Naval and Historical Museum at 11:36 AM 5 comments: