Vallejo: A Place of Rare Beauty 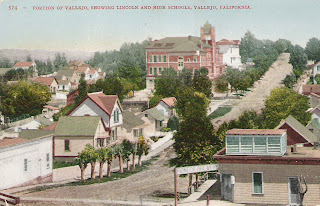 Perhaps it's true that some things never change. In 1883 the Vallejo Evening Chronicle described Vallejo as "a place of rare beauty," but cautioned that "there is room for a vast amount of improvement." Here is the complete article:

A Place of Rare Beauty

"There are few places in the world so finely situated as Vallejo. The town itself adds little to the lovely scenery that surrounds it. This is a pity, for a clean town with white cottages and church spires enhances the landscape. Still Vallejo is much superior to many of the towns of California and the West. Its yards are trimmer, its shade trees more numerous and the architecture of the cottages and the more pretentious houses more refined and varied. Before the doors of many workingmen's houses geraniums and tea roses are blooming and evergreen trees are carefully trimmed. Indeed the model home for the workingman might be found here in Vallejo, the product of the taste of some mechanic with fine artistic nature. There is a great deal of art displayed in the structure and setting of many of the cottages that cling to the hills. Although there is a great deal of beauty shown in some cottages such instances are too isolated, they are too infrequent. There is room for a vast amount of improvement. Some houses are slatternly kept and their untidiness mars the beauty of the town. Let a generous rivalry spring up between cottagers in the matter of improving their places. In doing this they would be cultivating art, which can find expression in a garden as well as on a canvas. It is a pity that anything is neglected which would add to the beauty of the town, for its location is perfect. The hills, the water, the Island and the colors over them are as beautiful as the most favored spots of Italy."
Posted by Vallejo Naval and Historical Museum at 12:59 PM 3 comments: 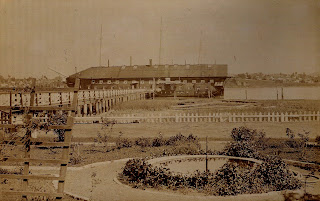 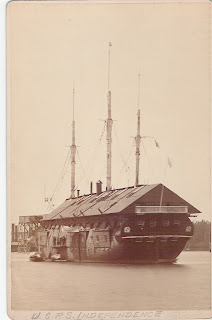 The recent announcement by the Navy that the World War Two battleship USS Iowa would go to Los Angeles instead of Vallejo is not the first time that Vallejo faced the possibility of losing a historic ship to southern California. Nearly 100 years ago, in September, 1914, the Vallejo Evening Chronicle published an article about the fate of the Receiving Ship Independence, a historic vessel that had been a landmark on the Mare Island water- front since 1857:

"Would Save Independence: Los Angeles Starts Movement to Secure Old Relic From the Navy"

"If Vallejo and other cities in this vicinity do not want the old Independence as a relic there are cities farther away that do. Los Angeles has decided that the frigate would be of value at their port as shown by the following clipping taken from the Los Angeles Examiner."


"By resolution the City Council yesterday requested Mayor Rose to enter into into communication with Secretary of the Navy Daniels urging that official to donate the United States Steamship Independence, the historical craft built at the Boston Navy Yard in the early part of the last century, to Los Angeles as a relic. The resolution was presented by Minute Clerk Carroll at the request of Councilman Betokuski, who is now out of the city."

"The vessel is now at the Navy Yard at Mare Island."

"The resolution calls attention to the fact that the city's acquisition of this historical craft would be acceptable, as forming the nucleus of a naval museum at the Los Angeles harbor."

USS Independence was launched in 1814 at the Boston Navy Yard as the first ship-of-the-line in the U.S. Navy. After more than 40 years of service she was transferred to the Mare Island Navy Yard in 1857 where her upper decks were roofed over and she was converted to a receiving ship. The vessel was a well known landmark on the Mare Island waterfront for many years, but eventually time took its toll on the old wooden-hulled ship.In 1912, Independence sank at her moorings. Efforts to pump out and refloat the vessel were unsuccessful, and the Navy finally decided to scrap the old relic.

Ultimately, the plan put forward by Los Angeles did not come to fruition. Independence was towed out to the mudflats of the Bay and burned. Today, only photographs and a handful of artifacts from the ship survive.
Posted by Vallejo Naval and Historical Museum at 11:29 AM No comments: