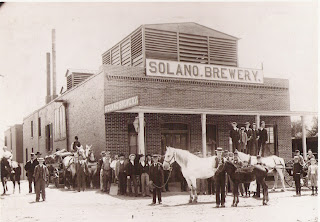 Founded by German immigrants Charles Widenmann and Peter Rothenbusch, the Solano Brewery was renowned for its Solano Steam Beer. By 1891 the Marin Street facility had a brewing capacity of 6,000 barrels a year and boasted its own malting house. Charles Widenmann later bought out his partner and continued operating the brewery until 1918. Members of the Widenmann family were prominent in the area's political, educational, business, medical, and civic affairs for many years. 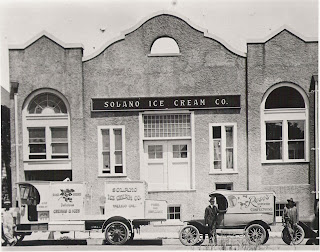 When Prohibition put the Solano Brewery out of business, the company's enterprising owners closed the Marin Street brewery and reinvented their business around the corner on York Street as the Solano Ice Cream Company. Nationwide Prohibition took effect in 1919, but in Vallejo taverns and breweries within five miles of Mare Island Naval Shipyard were ordered closed by the Secretary of the Navy in 1918 due to military restrictions imposed during World War I.
Posted by Vallejo Naval and Historical Museum at 3:32 PM No comments: