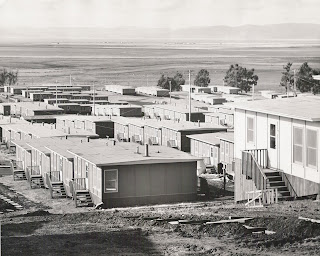 At the peak of World War Two nearly 50,000 people worked at the busy Mare Island Naval Shipyard. To accom- modate all of these wartime workers, the federal government built numerous defense housing projects throughout the city of Vallejo. The largest of those projects (pictured here) was Chabot Terrace, located in north Vallejo on land formerly owned by the Mini family. In late 1944 several boys who lived in the area found what they hoped would be a buried treasure. This is how the Vallejo Times Herald reported the story:

"There's a treasure hunt on for buried gold pieces at Chabot Terrace.
"It all started when four 10-year old boys, residents of the community, uncovered three gold pieces of the $10 denomination.
"Now others in the community scratch about the excavation for the new athletic field in the hope that additional gold will be found.
"Francis Kephart was the first to find treasure, a $10 gold piece dated 1853. Then Norman Chambers and William Parkerfound a coin dated 1881. A third $10 gold piece was recovered by a fourth boy whose name has not been obtained.
"Encrusted with mud, the boys at first believed they were only metal slugs, but when the Kephart boy scratched the metal with a pocket knife and found "ten dollars" engraved on it, he knew it was more than a slug.
"Then when the Chambers and Parker boys, together, found the second coin, others began to join in the search in the belief that the coins had been buried in an old tin can that had rusted and became scattered when the steam shovel struck it during excavation work.
"The three boys named reported their find to the Vallejo Police Department and were advised to turn in the gold, which they did at the Mechanics and Merchants National Bank, receiving the equivalent monetary value in currency. The third coin, according to reports, is being kept as a souvenir.
"But the hunt for buried gold continues at Chabot Terrace, with speculation rife as to who and when buried the treasure and how much there was when it was hidden."

The paper never followed up on whether more "treasure" was found, and the source of the coins was apparently never discovered.
Posted by Vallejo Naval and Historical Museum at 3:41 PM No comments: