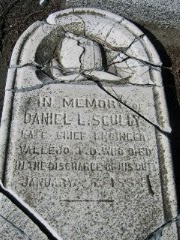 On this day in 1884, Chief Engineer Daniel Scully of the Vallejo Fire Department gave his life in the line of duty. Yet 130 years later his name still does not appear on the memorial at Vallejo City Hall commemorating other fire fighters who made this ultimate sacrifice.  On January 25, 1884 a fire broke out in downtown Vallejo. The next day, the Vallejo Evening Chronicle reported the story:


“In a short time it was reported that the fire was in the Bernard block on Sacramento Street, and a rush was made in that direction. It proved to be in the furnishing goods store of S. Strause in the Sacramento Street side of the building. Those first on the scene of the fire reported that no blaze was to be seen, but that a dirty smelling and heavy black smoke was issuing through the front doors and windows of the building. The people stood in crowds watching the progress of the devouring element and in a short time the flames broke out and lit up the whole neighborhood.”

“Chief Engineer Daniel Scully of the fire department was indefatigable in his efforts to suppress the flames and visited the different parts of the building to see where the best and most effective work could be done. He had been in the second story of the building where the smoke was intense and suffocating, and returned to the street, when in answer to a question he replied that he felt dizzy. He placed his hands on the shoulders of Thomas Gorham and Philip Steffan and sank down. They carried him to the sidewalk and afterwards to the Naval Drug Store where restoratives were applied, but all to no purpose as he died in three minutes after being brought in.”


Six years after his death, the Evening Chronicle noted that Scully’s sacrifice was still remembered by his fellow firefighters: “One mournful emblem hangs upon [the firehouse] walls, a reminder of duty well performed and paid with death and whose daring must prove an inspiration to every fireman here. We allude to the heavy leather regulation hat which hangs here and worn by Daniel Scully, the then foreman of the company and who met his death fearlessly while fighting the flames in the Bernard building six years ago. The fire department has its local hero and martyr in the person of Scully and the memory of his unselfish sacrifice must always dignify and exalt its work.” 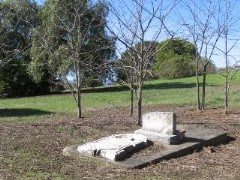 Chief Engineer Daniel Scully was buried in the Carquinez Cemetery on Benicia Road. Today, his grave marker is broken and what remains of the inscription is badly worn. Daniel Scully’s sacrifice has been forgotten.


In his book The Old Curiosity Shop Charles Dickens wrote: “The memory of those who lie below passes away so soon. At first they tend them, morning, noon, and night; they soon begin to come less frequently; from once a day to once a week; from once a week to once a month; then at long and uncertain intervals; then, not at all.”

Posted by Vallejo Naval and Historical Museum at 12:53 PM 4 comments: