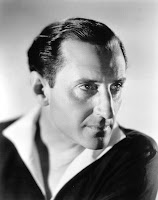 During WWII, patriotic rallies and War Bond drives at Mare Island inspired shipyard workers to give their best and to support the war effort. On October 7, 1944, sixty-five years ago today, British actor Basil Rathbone was one of the featured guests at a noontime rally at the Shipyard. The day before the rally, the Mare Island Grapevine reported on the upcoming show:

“Basil Rathbone, noted stage, radio and screen personage, heads the list of stars and celebrities who will appear here tomorrow noon in a huge War Fund rally for Mare Island. The rally will be staged between drydocks 3 and 4, east of Gishville.”

“Monte Blue, star of silent films and one of Warner Brother’s first Vitaphone talkie heroes, also will be on the bill.”

“Rathbone, known internationally for his portrayal of Sherlock Holmes on the screen and radio, is president of British War Relief in southern California.”

“One thought worth considering,” Rathbone said at the rally, “is that to whatever ally our War Chest dollar goes, it is the greatest way we can expand our way of living to other countries.”

“The suave British actor said that there were a million people destitute in London, because of robot bombs,” the Grapevine continued. “He told, also, of the desperate need in Athens, Rotterdam, and Poland.”

“We have so much to live for,” he concluded dramatically, “Let’s give them hope!”