Burning of the State Capitol 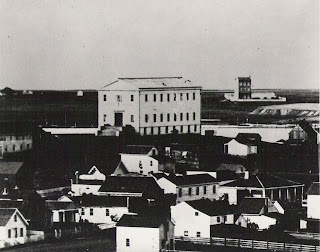 August marks the anniver- sary of a significant event in Vallejo's early history. Vallejo served as California's state capital in 1852 and 1853. The capitol building was located near the corner of York and Sacramento Streets - today the location of the new downtown transportation facility. Following the departure of the state legislature to Benicia in 1853, the former capitol building served as a library, meeting hall, and warehouse. In August 1859, the old capitol building was destroyed by fire.
A later newspaper account described the fire:
"At the time of the conflagration, J. B. Frisbie and Burcham had a considerable quantity of hay stowed in the basement. The day before an incendiary attempt on Georgia Street had aroused apprehensions among the citizens, and Mr. Topley and some others who had examined the State House with the possibility of a fire there in view, found evidence of the occupation at night of the place where the hay was stored. They nailed up everything securely so that no access was offered to the hay, and left. It was on the next day after - the morning of August 20, 1859 - that the building burned."
"The flames first broke out on the water side and were seen first by a man in a sloop on the bay. The alarm was given and the people rushed to the spot. But there was no fire apparatus in that day and the building burned to the ground before their eyes."
Following this disaster it became apparent that the community needed better fire protection. Volunteer hose companies were formed in the following years and these companies protected the city until the establishment of a municipal fire department in 1906.
Posted by Vallejo Naval and Historical Museum at 5:15 PM 1 comment: