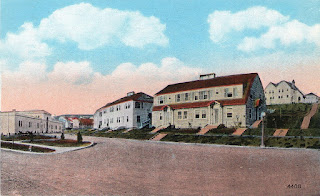 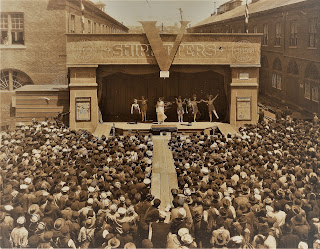 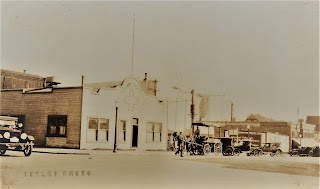 April 2017 marks the 100th anniversary of the United States’ entry into WWI – the “war to end all wars.” To commemorate this historic centennial, the Vallejo Naval and Historical Museum is featuring an exhibit called “Over There/Over Here” which runs through August 26, 2017. Following are a few of the interesting local stories featured in the exhibit:

Corporal Ed Houseman – “There was no time for fooling.”

Vallejo native Edwin Houseman worked at Mare Island prior to WWI but like many others he enlisted in the Army when the War broke out. Houseman traveled by train to the U.S. Army Training Camp at Gettysburg, Pennsylvania, but never made it “over there” to Europe. The Armistice was signed on November 11, 1918 just before he was shipped overseas.

Ed Houseman was also a passionate researcher of local history, and he wrote about Mare Island during WWI in a later memoir: “Then in April 1917 came the First World War. The various classes of apprentices [at Mare Island] were pushed in their education to the limit of their ability. There was no time for fooling. Long hours and urgent work took all of our energy. The manufacture of electrical components, the preparation for sea of our own ships, and the repair of the battle damaged British and the interned German ships were of first priority. Then came the advent of new employees. Some good mechanics, some not so good, and some just plain draft dodgers. Two of these were so loud in their bragging about their ability to beat the draft that it resulted in the enlistment of several apprentices, including myself.”

Unlike other forms of camouflage, the intention of dazzle is not to conceal but to make it difficult to estimate a target's range, speed, and heading. The concept was invented by Norman Wilkinson, who explained in 1919 that he had intended dazzle more to mislead the enemy about a ship's course, and so to take up a poor firing position, than actually to cause the enemy to miss his shot when firing.

Dazzle was adopted by the British Navy, and then by the U.S. Navy, with little evaluation. Each ship's dazzle pattern was unique to avoid making classes of ships instantly recognizable to the enemy. The result was that a profusion of dazzle schemes was tried, and the evidence for their success was at best mixed. So many factors were involved that it was impossible to determine which were important, and whether any of the color schemes were effective.

Posted by Vallejo Naval and Historical Museum at 10:37 PM 115 comments: