"Mare Island employees were ready this week to celebrate their first peacetime Christmas in four years.

"Although a hangover of war shortages made Christmas presents scarce, most workers planned to celebrate Christmas in the traditional manner with their families.
Many families are together for the first time in many years, as Mare Island employees greeted their relatives from overseas.

"The proximity of the Mare Island area to the major Pacific ports made transportation difficulties minor for employees with sons returning from the Pacific, although many servicemen were reported stranded on the coast because of the transportation tie-up.

"Few parties were planned in Mare Island shops and offices because the special extended holiday schedule moves Christmas four days after the last Yard work day, and because of restrictions against parties on government time.

"The traditional Christmas trees and Yule decorations however were much in evidence all week.

"Many shops, offices and individuals on Mare Island helped make the season a happier one for patients at Mare Island Naval Hospital by planning parties for men in the wards.

"At the hospital it was reported that wards were competing against each other for Christmas decoration honors, with patients being assisted by corpsmen and nurses." 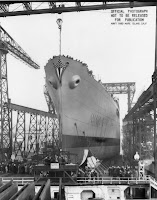 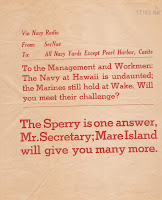 The sub- marine tender USS Sperry was launched at the Mare Island Naval Shipyard 68 years ago today, on December 17, 1941. Sperry was the first ship launched at Mare Island following the Japanese attack on Pearl Harbor on December 7th. Usually, the launching of a new ship at Mare Island was accompanied by ceremony, celebration, and widespread press coverage. But the launching of USS Sperry was different. The declaration of war and the fear of more Japanese attacks made the launching a low key event. The Vallejo Times-Herald published only two photos of the launching ceremony, instead of the usual lengthy news story. Information about shipyard activity was kept to a minimum due to newly imposed wartime security restrictions. The brief radiogram shown here, sent by the Secretary of the Navy, touted the Sperry’s ability to meet the wartime challenge. Note that the message was sent to “All Navy Yards Except Pearl Harbor and Cavite.” Those bases were still reeling from the recent Japanese attacks and were under blackout conditions.

USS Sperry was one of five submarine tenders built at Mare Island. She was named for Elmer Ambrose Sperry, an inventor of precision instruments and a pioneer in American submarine construction. The sub tender was christened by Sperry’s daughter, Mrs. Helen Sperry Lea. California Governor Culbert L. Olson also attended the launching ceremony.

USS Sperry served throughout the Pacific during WWII and had a lengthy post-war career. She was eventually decommissioned in 1982, following a career of more than 40 years. Among her post-war commanding officers were renowned WWII submarine skippers Richard O’Kane and Eugene B. Fluckey.

Posted by Vallejo Naval and Historical Museum at 9:37 PM No comments: