A new exhibit opening at the Vallejo Naval and Historical Museum on July 18th will give visitors a fresh perspective on Mare Island. “Walk the Island: Photographs by Mike Narciso” features a series of black and white images of Mare Island buildings and landscapes taken over the past several years by this outstanding California photographer.

“I moved to Vallejo in 1990, my wife’s hometown,” says Narciso, “We moved up from Los Angeles where we were both pursuing art careers. Nancy was expecting our first son and she needed to be close to family. I didn’t know much about this area or Mare Island, but from across the channel it looked like a great place to explore. One day I found myself working in Shop 680, cleaning up after a movie crew. I brought my camera and took a few photographs. The large milling table, lathes and other machines were still there at that time. I wanted to come back and seriously photo-graph the buildings and the Island in general. I didn’t get that opportunity until 2000, when I started “walking the Island.” Since then I have collected a few thousand images, most of which have yet to be edited.

“Each year the work developed into a new group of photographs. This exhibit is a sampling of the various groups of images taken over the last seven or eight years.”

“I started documenting the Island and ended up with a completely different point of view. So, these photographs are not really about the structures on Mare Island, they’re about the memories we see through the crumbling facades, the rusted steel, the ships resting along the docks. These photographs are about the shapes and textures, the light and shadows, of a once thriving community. They’re photographs taken today looking at the Island’s past; looking at it’s rich history. Each year from the end of fall to the beginning of spring I found the right conditions to walk in. The shadows seem heavier, the rain and fog add to the darkness of the day, and the black and white film blends it all together.”

“I love black and white film. Although I’m scanning and printing my negatives digitally, these days, I’m still processing film. After all these years it’s a ritual that has stayed with me.”

Mike Narciso has exhibited throughout California and his Mare Island images were most recently featured in a one-man exhibit at the Triton Museum of Art in Santa Clara. “Walk the Island” runs through September 5th. The Vallejo Naval and Historical Museum is located at 734 Marin Street, Vallejo, California. Call (707) 643-0077 for more information.
Posted by Vallejo Naval and Historical Museum at 5:06 PM No comments: 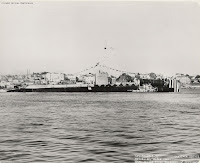 On July 2, 1957 – 52 years ago today – Mare Island launched the USS Grayback (SSG 574). The Grayback was the first submarine entirely designed at Mare Island and marked an important transition in submarine warfare. While Grayback was the last conventional diesel-electric powered sub built at Mare Island, she was also the first Mare Island sub designed to launch guided missiles. The two Regulus missiles carried by Grayback were housed in a hanger on the sub’s foredeck. Within a few years, vertical launch, ballistic-missile carrying, nuclear powered subs would become the standard bearers of the U.S. fleet, but when Grayback was launched, she was considered state-of-the art Cold War technology.

The submarine was christened by Mrs. John A. Moore, widow of the skipper of the first USS Grayback (SS 208), a sub lost in the Pacific during WWII. Principal speaker at the launching ceremony was Vice Admiral Charles A. Lockwood, USN (ret), who had commanded the U.S. Submarine Force Pacific Fleet during the war. Lockwood’s comments underscored the intense fear sweeping the world as the U.S. and the Soviet Union escalated their nuclear arms race. The Grayback’s nuclear missile capability, said Lockwood, “reduces, by comparison, the atomic bombs dropped at Hiroshima and Nagasaki to the level of Fourth of July firecrackers.”

In his speech, Lockwood warned against the dangers of Communist propaganda. “You may be assured,” he told the 7,000 people gathered for the launching, “that the current Communist drive to outlaw nuclear weapons is not motivated by love of humanity. Their purges in Russia, their ruthless slaughter of Hungarians, their slave labor camps, and the recent boastfully announced executions in Red China, all clearly show their real feelings toward humanity.”

Lockwood’s lengthy speech concluded with an assurance that “the good Lord, who has brought us up from a mere handful of colonists to our present world stature – and with whose divine aid we have won all our wars – gave us that weapon (the fissionable and fusionable atom), as a sword and shield with which to protect ourselves against the godless hordes of Communism.”

Although the Regulus missile program would prove to be short-lived, the USS Grayback would have a long and distinguished career. Her later conversion to Special Operations and Amphibious Transport duties kept Grayback on the front lines of the U.S. Navy’s submarine force throughout the Cold War.
Posted by Vallejo Naval and Historical Museum at 10:49 PM No comments: