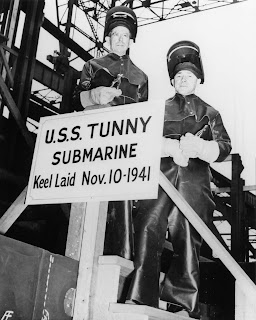 Seventy years ago today, on November 10, 1941, a keel laying ceremony was held at Mare Island for the Gato-class submarine USS Tunny (SS 282). The United States' entry into World War Two was less than a month away, but already Mare Island was gearing up its production to meet wartime needs that seemed inevitable. Tunny was the 12th submarine built at Mare Island, but many more would follow once the U.S. entered the War. This is how the Vallejo Times-Herald covered the keel-laying ceremony:

"In a dramatic salute to Armistice Day, which the yard is observing tomorrow, Mare Island Navy Yard laid the keel of the submarine USS Tunny at 12 o'clock today"

"The keel laying of the Tunny marks the third submarine to occupy ways No. 3 during 1941 and the fifth submarine keel to be laid down during this year. The USS Gudgeon was launched from this spot on January 25 and the USS Trigger on October 22. Submarine keels laid during 1941 include the USS Trigger, laid February 1; the USS Wahoo and USS Whale, laid June 28; the USS Sunfish, laid September 25, and this, the USS Tunny, laid today."

"The brief formal program was void of speech-making or fanfare - it was a short, businesslike procedure - another job in the process of being done. Commencing at noon with a selection by the yard band, the actual keel laying commenced at 12:05 when Captain F.G. Crisp, U.S.N., yard manager, gave the order and the riggers hoisted the keel into position. Robert F. Cooke, foreman, electric shop, and W.N. Simons, chief quarterman, electric shop, acted as honorary welders by putting the first weld on the Tunny keel."

"At 12:15, upon completion of the welding, Lieut. Comdr. Leverett S. Lewis, U.S.N., acting hull superintendent, inspected the welds and reported: 'The keel is well and truly laid.' The national anthem by the yard band closed the ceremony."

USS Tunny was launched on June 30, 1942 and commissioned on September 1 of that same year. The submarine made nine war patrols in the Pacific during World War Two and survived the War, returning  to Mare Island for decommissoning in December 1945. The sub was later recommissioned and modified to serve in the Navy's experimental Regulus missile program. Tunny served through much of the Cold War and was decommissioned for the last time in 1969. She was sunk in 1970.
Posted by Vallejo Naval and Historical Museum at 8:12 PM No comments: 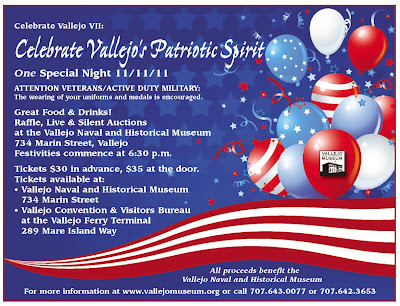 Posted by Vallejo Naval and Historical Museum at 3:27 PM No comments: