"J.R. English received a telegram this morning from J.B. Frisbie Jr. announcing the death of his father, Gen. J.B. Frisbie, which occurred in the City of Mexico at 3 a.m., today. And with his passing one of the founders of this city was numbered with the great army of the dead, for during the years that he made Vallejo his home General Frisbie worked untiringly for its good. He was the builder of the Bernard Block, and developed the White Sulphur Springs, his original investment there exceeding $100,000.

"The deceased was a native of Albany, New York, where he was born May 20, 1823. He studied law and enjoyed a lucrative practice in his home state until 1846 when he was elected captain of the Van Rensselaer Guards, acknowledged then to be the best drilled body in the state. War then existed with Mexico and as many of the young men of Albany were desirous of entering the service in defense of their country, Captain Frisbie recruited a company, which under the name of Company I, joined Col. J.D. Stevenson’s regiment at Governor’s Island and, embarking for San Francisco, reached the little hamlet of Yerba Buena after a six month’s trip.

"The regiment continued in service until July 1848 when it was mustered out, General Frisbie then associating himself with General Vallejo and occupying himself with the management of the latter’s extensive estates. From that time dated Frisbie’s extensive work for the advancement of the interests of Vallejo and Benicia. He was largely instrumental in securing Mare Island as a location for the navy yard and was also the promoter of the California Pacific Railroad, designed to connect Vallejo with the interior of the state, touching at Marysville, Sacramento and other points. The road was speedily built and, with indications of its success, it was further extended, the plan being to run branches into Napa Valley, Sonoma and the Russian River territory.

"The project was too great for that time, however, and it brought financial embarrassment to those who had hoped for so much from it. General Frisbie was not the man to succumb to temporary embarrassments, and the fact that he was at this time dispatched by the President and Secretary of State to the City of Mexico, where his missions resulted in amicable relations being established between the two countries and the government of General Diaz being recognized, led him to determine to make that land his adopted country and it it there that he has since made his home.

"In Mexico, as in California, he was ever a progressive, enterprising citizen, and his loss will be felt by many. He is survived by three sons and four daughters, all married and all residents of Mexico." [note: Fannie Vallejo Frisbie preceded her husband in death, passing away in 1905. Both are buried in Mexico City].
Posted by Vallejo Naval and Historical Museum at 11:16 AM 4 comments: 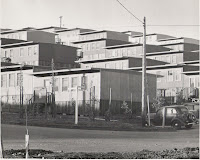 In 1945, a report by the City of Vallejo declared that the city had "undergone one of the most radical changes of any community in America in the past four years. Nowhere else has the impact of the war, with all of its resultant confusion, congestion, and expansion been more direct." Many families who lived in Vallejo's temporary defense housing projects later built or bought their own homes in the community. Others returned to their home states once the war had ended.
Posted by Vallejo Naval and Historical Museum at 9:49 PM 62 comments: