Author Jack London, shown here playing cards at the Vallejo Yacht Club around 1913
was a frequent visitor to Vallejo. Pictured above are (from left) George F. Hilton,
unidentified, Judge John Browne, and London. The Roamer, London’s yacht, was often berthed at the Club, and London himself spent much time around Vallejo and Benicia as a young man. His adventures up and down the Carquinez Straits were detailed in his book Tales of the Fish Patrol. In one passage from the book, London describes how he tried to maneuver a small boat through the brutally swift currents of the Straits:

“We were now at the mouth of the Straits, in a bad stretch of water. Here the Vallejo Straits and the Carquinez Straits rushed directly at each other. Through the first flowed all the water of Napa River and the great tide-lands; through the second flowed all the water of Suisun Bay and the Sacramento and San Joaquin rivers. And where such immense bodies of water, flowing swiftly, clashed together, a terrible tide-rip was produced. To make it worse, the wind howled up San Pablo Bay for fifteen miles and drove in a tremendous sea upon the tide-rip.”

“Conflicting currents tore about in all directions, colliding, forming whirlpools, sucks, and boils, and shooting up spitefully into hollow waves which fell aboard as often from leeward as from windward. And through it all, confused, driven into a madness of motion, thundered the great smoking seas from San Pablo Bay.”
Posted by Vallejo Naval and Historical Museum at 2:22 PM 1 comment: 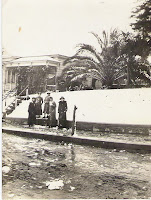 On the morning of January 9, 1913, Vallejoans awoke to an unusual site - snow in Vallejo! During the night, the snow began to fall and by morning the city was covered in nearly 4 inches. The next day the newspaper proclaimed: "Vallejo Covered in Mantle of 'The Beautiful.' Sees the Spirit of Winter Awakened in Many Breasts." The accompanying article described the reaction in the community:

“There were some near casualties due to excessive exuberance the primordial spirit. Miss Eleanor Morgan of Coalinga, who is visiting Mrs. Guy Peabody, was struck in the head with a hard snowball and knocked unconscious. Mrs. Louis Vandre slipped on the slippery sidewalk while dodging a snowball, and was badly shaken up, and Mrs. Richard Ruling was knocked unconscious. Several windows were broken during the morning.”

“For the first time since 1886, a white mantle of snow covered Vallejo for several hours yesterday morning. Since that date a few slight flurries have been noticeable, but the precipitation yesterday was the heaviest on record in more than a quarter of a century. The first specs were noticed shortly before 3 o’clock yesterday morning, and the fall was steady until 10:30. The weather was warm, considerably under the freezing point.”

“If some hardened individual from the frost bitten east should have chanced to have been in Vallejo yesterday, he would have wondered what sort of mania the people were suffering from. It is safe to say that it was the first time five thousand of local people had ever seen bonafide snow, except on nearby hills or the Sierras a few miles to the eastward, and its effect on the uninitiated was magnetic.”

“Young and impressionable children screamed with delight when they first peered out of the windows and saw the earth enveloped in the sparkling coat. Fond parents watched them desport themselves out of doors. Most approached the snow banks timidly, touched the stuff gingerly, smelt it, then tasted it. Then they rolled it into snow balls, awkwardly, yet instinctively, and a Jack London would have said they felt the experience of some ancestor, who in times past rolled and made balls out of frozen water. Young Vallejo then proceeded to sit down in the strange stuff, then rolled around in it, and the parents, who had seen something like this in their younger days, forgot to advise them about wet feet.”

“It was a strange sight for an observer, accustomed to snows and blizzards to watch the reception of the snow in Vallejo. In downtown streets staid business men forgot their dignity and gingerly rolled up the balls and belted passersby. An introduction was not necessary and many a new stiff hat is badly dented today as a result of a fusillade from men and boys, who made targets of everyone in sight.”

“Many showed their strangeness to the sensation of being in the snow. Where some east coast urchin would have snatched up a handful and vigorously ‘washed’ someone’s face in it, and perhaps rolled snowballs with ‘bullets’ in them, these past master features were lacking in Vallejo. The instinctive ‘spirit of winter’ which in many cases had been slumbering for three generations, awakened awkwardly but it nevertheless existed and blossomed forth.”

“The snow was such an uncommon treat that school authorities recognizing the futility of compulsory attendance at classes dismissed all the youngsters and allowed them to enjoy a white winter’s day.”
Posted by Vallejo Naval and Historical Museum at 7:39 PM 4 comments: