On Saturday, September 19 at 1:00 p.m. the Museum will host the first in a periodic series looking at Vallejo’s Unknown Pioneers. Local author and researcher Sharon McGriff-Payne will tell the story of John Grider, one of Vallejo’s most significant African American pioneers. The program will be held as part of the Museum’s monthly Free Family Day.

Ninety-five years ago John Grider, one of the last surviving members of the Bear Flag Party, was honored at a huge Admission Day celebration in Vallejo.

The September 12, 1914 event attracted more than 40,000 people from all over the state to Vallejo’s downtown and was hosted by the Natives Sons and Daughters of the Golden West, Parlor 71. Grider, an African American, was then in his early 80s.

Nearly 70 years earlier, on June 14, 1846, Grider was among a small band of about 37 men who wrestled control of General Mariano Guadalupe Vallejo’s ranch at Sonoma – an incident that would come to be known as the Bear Flag Revolt. The incident would help to lead to California statehood and the American takeover of western territory, which was then owned by Mexico.

Grider, who moved to Vallejo in 1850, told a writer who interviewed him shortly after the 1914 parade that he was one of about seven black men who participated in the Bear Flag incident. He found the paint for the original Bear Flag, a symbol of the short lived Bear Flag Republic. The Bear Flag continues to serve as our state flag. Grider also served as a flag bearer on the day of the Bear Flag Party takeover.

Grider was about 98 years old when he died at the Fairfield County Hospital on December 23, 1924. He is buried in the Suisun-Fairfield Cemetery. He was the lone African American in the Society of Vallejo Pioneers, a distinction given to pioneers who were in Vallejo prior to 1859. Grider was a well-respected figure throughout his long life in Vallejo. He spent most of his work life working for area livery stables, farms and the Vallejo Steam Laundry.

Learn more about this fascinating Vallejo pioneer on Saturday, September 19 at 1:00 p.m.
Posted by Vallejo Naval and Historical Museum at 3:11 PM No comments: 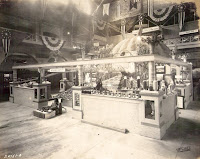 The 2009 California State Fair ends on Labor Day and, as always, Solano County has entered one of the best County Exhibits of the event. California’s State Fair dates back to 1854 and over the years the Sacramento fair other regional fairs have celebrated the state’s agricultural bounty.

On September 5, 1887, the Vallejo Evening Chronicle described Solano County’s entry at the Mechanic’s Industrial Fair held in San Francisco. The Fair featured agricultural exhibits along with displays of the state’s industrial output:

“The display of Solano County products at the Mechanic’s Fair is located left of the main entrance, and is tastefully arranged. Festoons of vines laden with grapes are hung above the tables which are grouped around a large pyramid, not yet completed, but which is to consist of fruit in glass. The exhibition is under the supervision of J.B. Robinson of Vallejo, who is assisted by H.C. Blake of Vacaville. Among the displays now on the tables are the following: J.G. Edwards of Suisun, a collection of apples and pears; James McNulty, Suisun, grapes. A.T. Hatch, one of the most successful fruit growers in the state has a display of fruits, grapes and almonds. C. Reaves, Suisun, handsome grapes. M.G. Shilebar, Suisun, peaches and pears; G. Plaisted, Suisun, Japanese persimmons, garlic, walnuts; L.B. Abernathie, Suisun, Texas pecans figs and nuts; Joseph Dawlson, Suisun, Kelsey Japan plum and other fruits; J. Wing, Fairfield immense pears; Joseph Armstrong, Suisun quinces and pears; C.W. Samelson, Suisun oranges, grapes and fruits; B.N. Sheldon, Solano, apples and a particularly fine display of other fruit; H.W. McEwen, Suisun, peaches and pears; W. Foster, Sloan pears in great profusion; J.H. Banman, Suisun, pears; Mrs. G.M. Blake of Pleasant Valley has a display of fruit rivaling any other in the Fair; James R. Collins, Blue Mountain, shows two cucumbers twelve inches in circumference. W.H. Webb has some very fine pears and Joseph Blake of Vacaville displays luscious-looking nectarines.

A prominent feature of the display is a collection of sun-dried fruits. They were contributed by A.T. Hatch of Suisun, and from Vacaville J.B. Merchant, E.R. Thurde, Mrs. George M. Blake and J.H. Webster. In addition to the fruit, basalt paving blocks and native onyx are shown. It is complained, both by Mr. Robinson and Mr. Blake, that the fruit men are all so busy with their orchards now that they will not take time to send samples or come themselves.”
Posted by Vallejo Naval and Historical Museum at 3:05 PM No comments: