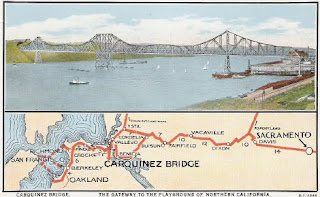 May 21, 2010 marks the 83rd anniversary of the opening of the Carquinez Bridge. The bridge spanned the Carquinez Straits between Vallejo and Crockett and completed the first direct highway link between San Francisco and Sacramento. The bridge had been the brainchild of Aven J. Hanford and Oscar H. Klatt, operators of the Rodeo-Vallejo Ferry Company. The growth of automobile traffic had caused a ten-fold increase in the number of vehicles using Hanford and Klatt’s auto ferries in the five years from 1918 to 1923. The need for a bridge across the Straits became obvious and the two partners formed the American Toll Bridge Company to undertake the project.

Ground was broken in 1923 and construction took four years. The new bridge was described at the time as a “majestic masterpiece of engineering” and was heralded as the world’s largest highway bridge. When it was finally completed in 1927, the total length of the new bridge was 4,482 feet and the main support towers stood 325 feet above the water. 14,000 tons of steel were used in the project and five steel workers lost their lives during construction.

On March 19, 1927, the final section of the span moved slowly up the Carquinez Strait on barges. Massive counterweights were suspended from the already completed portions of the bridge and were slowly filled with sand. As the counterweights eventually increased to 750 tons each, the span was slowly hoisted on cables into position. This spectacular engineering feat was completed in less than an hour.

Two months after the final span was lifted into place, the Carquinez Bridge officially opened. Thousands of people attended the ceremony on May 21, 1927. The governors of four states - California, Oregon, Washington, and Nevada - were on hand for the dedication. The great celebration was nearly eclipsed by other momentous news, shouted by newsboys hawking their afternoon papers on the bridge. American pilot Charles Lindbergh had reached Paris, completing the first solo trans-Atlantic airplane flight.

Following WWII, California’s population continued to boom. The nation’s interstate highway system expanded in response to America’s increasing dependence on the automobile. In 1958, a second bridge was built across the Carquinez Straits, parallel to the 1927 span. After the war the toll for crossing the original bridge had been eliminated, but when the new eastbound span opened on November 25, 1958, tolls were reintroduced at 25 cents per car.