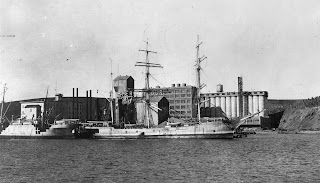 In 1860 Vallejo's founder, John B. Frisbie, chartered a ship to export wheat grown near Vallejo to Liverpool - the first shipment of wheat overseas from California. Captain A.D. Starr established Vallejo's first flour mill in South Vallejo in 1869. Flour shipped from the port of Vallejo would eventually travel to Asia, South America, and Europe as Vallejo became the largest flour-shipping port in California. The mill was purchased by the Sperry Flour Company in 1910 and later became the General Mills Sperry Division.

During WWI the Sperry Mills shipped tons of flour to Europe as part of the wartime relief effort. Employment at the mill increased from 125 workers in 1915 to 363 in 1919.

On August 30, 1934 a spectacular fire destroyed a large portion of the mill. Two marine elevators, 21 bins of grain, and 500,000 grain bags were consumed by the flames. Vallejo Fire Department crews were aided  by floating fire equipment from Mare Island. Explosions of grain dust blew huge sheets of corrugated metal off the roof of the mill and 6,000 tons of grain was destroyed before the blaze was finally brought under control.

The General Mills Sperry Division mill in Vallejo closed in 2004.
Posted by Vallejo Naval and Historical Museum at 4:13 PM